Exactly what kind of madness prompts a people to sit in a hot box, sweat profusely, then abruptly run out and jump into a freezing body of water? Or even roll in the snow? Contrast, often in rather extreme forms, seems to be the foundation of an uncompromising Finnish spirit. It shouldn’t be surprising, I suppose, in a land where roughly seventy days of endless daylight morphs into total darkness for months on end, and rugged natural beauty holds hands with technology and modern design in near perfect symbiosis.

Finland may be easy to ignore due to its location, and outside perceptions of Finland can be overly simplified. Cold. Snowy. Quiet. In truth, Finland is anything but simple and you may find as I did, that what you thought you knew about this country of just under 6 million was totally and wonderfully wrong.

Helsinki: Laid back and full of life

With over 180,000 lakes, 42 national parks, pristine coastline, festivals and exciting Nordic cuisine, there’s no shortage of ways to enjoy Finland’s Midnight Sun, beginning in the vibrant and very livable capital of Helsinki.

Finland’s capital is a thriving center of design and its seemingly ever- expanding Design District touts an array of studios, galleries and shops. At the Design Museum, one of many great museums, works of Finnish icons like Alvar Aalto are found through everything from glassware to furniture to clothing.

These days the city is also known for great food. Restaurants like Spis and Nokka have change the perception of the once bland Finnish food culture, earning praise for their creative use of fresh, local ingredients. Lunch at Juuri, a popular restaurant known for their sapas, or Finnish tapas, proved to be just as delicious as I’d imagined, leaving the memory of smoked rainbow trout swimming across my mind for hours.

After walking through the Esplanade, a long shopping boulevard with a park in the middle, I came to the Presidential Palace and one of several markets in the city. The scent of fresh fish and Lappland-style foods filled the air, but it was the sweet strawberries, grown quickly under long days of sunshine, that would prove most irresistible.

Nearby is the towering Uspenski Orthodox Cathedral, a reminder of the Russian influence brought here so long ago. I walked further to Senate Square and the green domed Lutheran Cathedral. This was the 1854 masterpiece of Karl Ludvig Engel, a young German architect who was brought in to lay out the city in a style similar to St. Petersburg; Neoclassical stone buildings with columns and pastel colors.

Next I cruised to the 18th century island fortress of Suomenlinna, built by the Swedes as a defense against the Russians. It would end up a Russian garrison town for over a hundred years, during which time Helsinki began to grow into a proper city and supply line. Today it’s a great place for history and a summer picnic.

It takes just 30 minutes from the city to land in the wilderness at Nuuksio National Park and the new Haltia Finnish Nature Centre. Architect Rainer Mahlamäki’s environmentally unique design, inspired by Finland’s national epic, the Kalevala, houses an engaging experience that showcases the best of Finland’s natural beauty. Audio and video experiences are kept as authentic as possible without dramatic soundtracks or staged events. “You’re going to have nature as it is”, said Aura Piha, my guide, “So we don’t promise bears and those kind of things”.

Afterwards you can step outside and hit the trails for a real-life encounter.


Kylmäpihlaja Lighthouse: A night on the open sea

After a three-hour journey down highways lined with forests and fields I reached the Satakunta region. I loaded onto a water taxi and headed through the archipelago to Kylmäpihlaja, an island that had risen from the water some 800 years ago as a part of post-glacial rebound. It’s a process that still sees the landscape of Finland rise up around 6 millimeters each year.

Built in 1952, the island’s lighthouse originally served 12 men who would guide ships through the archipelago to Rauma. Today satellite navigation has rendered their jobs obsolete, but the beacon remains and the building serves as a restaurant and hotel with the most magnificent of views. After a dinner of fresh whitefish I watched ships on the horizon from the observation deck and dodged angry birds flying around their nests.

By midnight the sun had just dipped below the horizon, and a cold breeze and crashing waves would soon lull me to sleep.

At 4:30am I was awakened with sunlight coming through the curtains, by now a regular, though not entirely welcome, occurrence. Morning greeted us with a rainbow as a mist of rain drizzled across the island.

As one of the oldest inhabited areas of Finland, the Satakunta region includes some of the countries most historic areas. Twenty minutes outside Rauma finds the Bronze Age (1500-500 B.C.) stone cairns at Sammallahdemäki, one of two UNESCO World Heritage Sites around Rauma. The piles here mark a change in burial customs, where the people began to cremate and inter remains under stone.

Cozy, small town Finland was found in Old Rauma during its annual Lace Week festival. An interest in lace making isn’t necessary to enjoy the lively atmosphere, music and market. The old town features historic wooden houses originating from the medieval period, the largest such assembly in the Nordic countries, making it the second World Heritage Site in the area.

Many of the homes in the old town once belonged to merchants, sailors and tradesmen and have been lovingly restored. Today many have been converted into artist’s studios and cafes. There are also historic museums, such as the Kirsti House, which shows the building style of the late 18th and early 19th century with a charming yard beside.

Stories accompanied many of the homes, like the porcelain cats in the windows of sailor’s homes. If they faced out, it meant the sailor was at sea, if they faced in he was home. Some stories came with coffee, ice cream and fresh berries.

An unexpected invitation to me to a private residence called Välmlä, where the owners Kaarina and Tapio had turned their historic residence into a living museum of many stories. As we enjoyed our drinks with fresh blueberries and ice cream, Kaarina delighted at sharing the history of their home. “It’s so exciting to realize that people have lived here at least 500 years ago”, she exclaimed, then proceeded to discuss the alcoholism, prostitution and various sordid deeds that occurred within its walls. There is, however, clearly much happiness today.

Before leaving Rauma I had the chance to experience the quintessential Finnish sauna. I’m told that a regular visit to the sauna every few days at home or in their apartment building is normal for most Finns, some mentioning they simply don’t feel clean without it. Though I was spared the traditional flagellation by birch branch, the sauna was none-the-less invigorating. Just as it felt I couldn’t take the heat anymore, everyone in the sauna raced outside and down the dock to the bay. I knew I had to do it. I took the plunge and, let’s say bravely, jumped into the cold waters of the Gulf of Bothnia. I swear my heart stopped for a few brief moments.

It was incredible, but I didn’t feel the need to repeat.

It was in the middle of a crowd watching Earth, Wind & Fire at the Pori Jazz Festival that I really began to understand the Finns, warm hearts opening up under the cloudy northern sky. It was pure joy and subtle melancholy in the faces of people eager to celebrate every ounce of the short Nordic summer.

The festival, one of the country’s most popular, attracts international acts each year, though jazz is only about 15%. However, it’s the atmosphere that brings people back.

I walked the dunes at Yyteri Beach in the morning (yes, Finland has beaches) and by evening was back at the festival. I saw joy mixed with tears as Finland’s treasured Vesa-Matti Loiri, an actor and singer for more decades than I’ve been alive, brought the Pori Jazz Festival, and my journey through Finland’s Satakunta region, to a close.

The journey was both everything and nothing like what I expected, a perfect contrast that Finns could surely appreciate.


This story originally appeared in the May / June 2014 issue of Highroads, the magazine for AAA Arizona.
(Circulation 535,000) 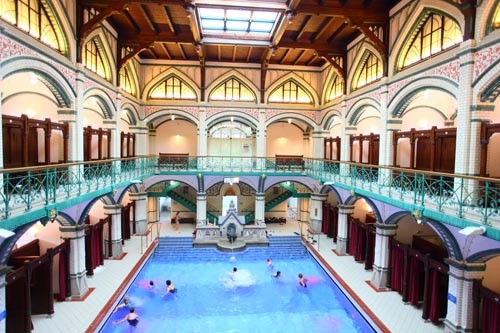